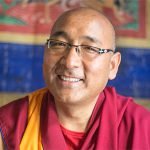 Geshe Thubten Sherab is fluent in English and connects very well with western students, presenting the Dharma in an accessible, warm and open manner. Born in Nepal, Geshe-la became a monk at age nine. He won his Geshe (Ph.D.) degree at Sera Monastery, with an additional year of study at Gyume Tantric College, in 2001. He served as Director of the FPMT Board for several years, and in his early forties went into a year-long retreat. He was then appointed headmaster of Kopan Monastery, where he oversaw the entire education program, including debate and tantric training. For the past few years Geshe-la has been teaching at FPMT Centres in USA, Canada, Mexico, Asia and Europe. Geshe-la’s return to LTC is warmly anticipated.

The Master From the New Generation

Read an article about Geshe Sherab from Mandala Magazine