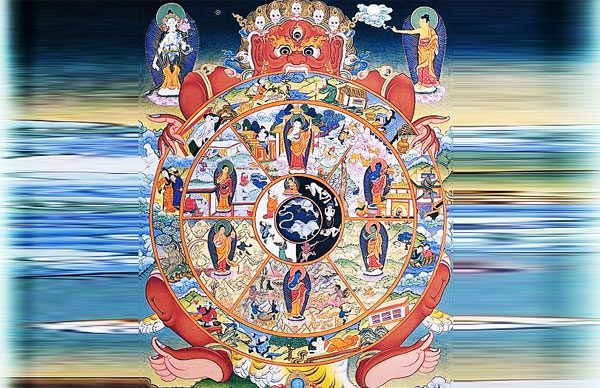 The Buddhist game (like a snakes and ladders) where we experience the vagaries of karma and rebirth in all its messy and terrifying glory! This game is a living Buddhist teaching, as it contains all the realms of existence, and the various paths to enlightenment. It is a powerful way to integrate your studies and gain a deep appreciation of your present life.

We divide into several small groups so that progress is quicker, and we aim to have at least each person attain a stage of the path that is ‘irreversible’, if we run out of time to reach full enlightenment!

The game was made by a monk for his sick mother when she was too sick to study the Dharma. The odds have been karmically worked out as to which rebirth we move to. Our next rebirth rests on the throw of a dice. We travel through the various realms, often circling through hells, animals, humans, and the hells again, until a (very genuine!) sense of renunciation arises to be liberated from this round of existence. We may also travel on the different spiritual paths all the way to buddhahood. The top row of the board illustrates the Buddha’s life story. Apparently, the shortest path to buddhahood is if you throw 11 ones in a row!

By donation (suggested $10 but no set amount)

REGISTER FOR THIS EVENT